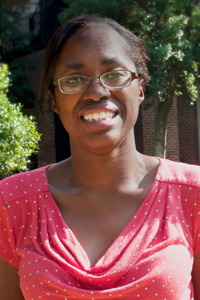 Hilary N. Green is an Assistant Professor in the Department of Gender and Race Studies at the University of Alabama. She earned her B.A. in history with minors in Africana Studies and pre-healing arts from Franklin and Marshall College, M.A. in history from Tufts University, and Ph.D. in history from the University of North Carolina at Chapel Hill. Her research and teaching interests include the intersections of race, class, and gender in African American history, the American Civil War, Reconstruction, Civil War Memory, the US South, and 19th Century America. Her book manuscript on the development of African American public schools in Richmond, Virginia and Mobile, AL is forthcoming from Fordham University Press (April 2016). Titled  Educational Reconstruction: African American Schools in the Urban South, 1865-1890,  the manuscript specifically deals with how African Americans and their white allies created, developed, and sustained a system of African American education schools during the transition from slavery to freedom. Most significantly, it demonstrates how the struggle for African American education did not end with the creation of public schools but rather it was transformed as urban African Americans demanded quality public schools from their new city, county, and state educational partners. Through their demands, they achieved success in securing African American teachers, creating of normal schools, associations, and other auxiliary educational resources, and establishing a robust liberal arts curriculum that had enduring effects on later public schools.  While they were less successful in terms of securing adequate funding and school board positions, the first twenty-years of state-funded schools represented a continued realization of the gains made since emancipation through education for African Americans in Richmond and Mobile.  It did not represent a “nadir”. Her second book project, still in its early stages, will focus on African American memory and the Civil War from 1865 to 2015. She is also currently at work on an article on the role of tourism in legitimizing African American public schools in post-Civil War Richmond, Virginia. She has several published book reviews and has contributed to encyclopedias and anthologies, including a book chapter in The Urban South During the Civil War Era, edited by Andrew L. Slap and Frank Towers, University of Chicago Press, 2015. She is currently the book review editor for the Journal of North Carolina Association of Historians.